The Latest Wave in the Commercial Drone Market

You are here:
Drone startupsUAV platforms 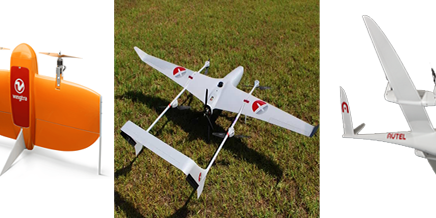 Here in BC when we operate our UAVs, we aren’t often dealing with flat farmer’s fields, endless sight lines and perfect weather.  We are operating in areas with steep terrain, coastal conditions, high winds and challenging takeoff and landing areas with tall timber and limited space.  With these factors to manage, the traditional skid landing that many fixed wing UAVs perform becomes problematic.  I’ve been researching options for a new fixed wing drone recently, and one of the main criteria that I’m now exploring is vertical take-off and landing (VTOL) capabilities. Fixed wing VTOL units are often called “hybrids”, “transition units” and in some cases, “tailsitters” depending on how they are configured.

For forestry UAV applications, we might be mapping amongst dense forest cover with stumps, waterbodies and other elements that make the traditional skid landing much riskier (or impossible), especially with an expensive camera onboard.  Another example is coastal work such as spill response or shoreline mapping. We recently took an hour-long boat ride to a site where we were required to capture data, and had to stage our drone on a densely vegetated shoreline with small rocky outcrop openings to take off from.  For this type of rugged coastal site, bringing our fixed wing UAV would rarely be a consideration in the past. If we had the option of a VTOL fixed wing though, we would get the best of both worlds: the flexibility to takeoff in a tight area, while also staying in the air longer and mapping a larger area faster than a multirotor would.

Deep stall landings, parachute systems, nets, or the ability to catch some fixed wing units out of the air can eliminate the need for skid landings in some fixed wings. With that being said, all of these methods introduce some additional risk, and are not guaranteed to be executed as safely as a unit landing vertically, especially in higher winds. Knowledge of the site is also a big factor.  If you are purchasing a drone to operate on your own farm with open acreage or crops to land in, there is little worry about the traditional skid landing.  On the other hand, if no pre-scout is possible until you get out there (which is often the case when we provide drone services outside of our local area), flexibility during takeoff and landing provides added confidence that the job will be completed correctly every time.

I’m currently seeking out a new fixed wing unit, and the criteria I am looking for includes:

As I continue the search, I’ve noticed a trend emerging within this particular class of drone.  2017 really seems to be the year of the hybrid fixed wing hitting the mainstream commercial drone market (in the sUAS class).  Many holes have been filled in the UAV platform market to date, but a number of industry players are seeing a need for this particular UAV niche – described by some of the criteria that I stated above.  I think the biggest challenge right now is to find one in a reasonable price range and payback period for drone service providers.  Some of the units that I’ve requested more information on so far are:

If you happen to know of other VTOL fixed wing drones on the market that are worth exploring, feel free to comment here or find my on Twitter @MikeMorellato. I’m excited to start flying this type of unit and gain the advantages that come along with it.

Are you still persuing your search for Fixed Wing VTOL

No, we settled with the Wingtra for our larger mapping missions and have been happy with it thus far

Vote Up0Vote Down  Reply
Supported by StrategicUAV.ca
An aerial shot (of the heli variety) while we were

We have new corridor mapping modes available on ou

As we prepare for another fire season here in BC,

Drone work continues to flow at SNRC, and has help

Surveying stockpiles and calculating volumes is an

Drone view over Nitinat Lake on a west coast trip

Meandering our way down the Sucwoa River as one of

Beam me up! Before you set off on your drone flig

Let's get around that wetland! Among our many oth

When we operate our drones, the flights are just t