A Map of Drone-Related Violations in Canada

You are here:
UAV regulations 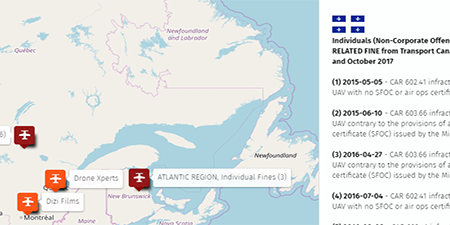 For every legitimate drone operator out there, there is an equal number that are not playing by the rules here in Canada.  Even some people with good intentions find themselves in illegal territory by misunderstanding the Transport Canada rules, which can be convoluted at times.  I came upon Transport Canada’s corporate and non-corporate offender’s data, and I included my findings in an interactive map below.  Data from the site covers the time period between August 2013 and October 2017, and includes enforcement actions where the individual or company was served with a monetary penalty notice or suspension of a Canadian aviation document.

A few things stood out to me when sifting through the data:

* There were zero corporate or individual fines handed out within the entire Prairie and Northern region from Transport Canada.  This includes Alberta, Saskatchewan, Manitoba, Yukon, NWT and Nunavut.  I was particularly surprised in Alberta, since a lot of drone activity has taken place there and many drone startups have emerged from the province (Edmonton is a good example).

* Out of 40 total fines, only 5 were corporate fines levied in this time span – the majority being individuals.  This isn’t a huge surprise, as I’m sure that people that are making a business with drones are more likely to be aware of at least the basic rules.  Also, much of Transport Canada’s enforcement comes from complaints or obvious incidents that are reported by a 3rd party.  I’m sure there are countless cases of negligent drone operations that probably never get onto the radar of Transport Canada (no pun intended).

* Although the offender’s list officially spans 4 years, drone-related fines did not begin until early 2015. There are a couple of main factors at play here: (1) drones were not yet part of the Canadian mainstream a few years ago, and (2) the framework for Transport Canada drone-related legislation was still evolving (and continues to this day).

What to Expect During Your Flight Review (Advanced Drone Operations in Canada)
May 9, 2019

Subscribe
Supported by StrategicUAV.ca
Strategic was glad to attend the Unmanned Systems

Jon piloting our VTOL fixed wing during a recent s

Fall has arrived! But let's choose a different tak

One of many photos captured by our fixed wing duri

Islet flyovers within Toquart Bay, during some rec

The fall colors are out in this orthophoto, made u

We're not just operating in the sky, but sometimes

We recently flew our highest drone mission to date

An aerial shot (of the heli variety) while we were

We have new corridor mapping modes available on ou