Resources to Advance Your Drone Program

If you or your company already have your own drone(s), and you are already operating with a Basic or Advanced license in Canada, this page was dedicated to drone users like yourself.  If you are brand new to drones and do not yet own one, start here for a better introduction.

The goal of this page is to provide some advanced resources so that you can get the most out of your company’s drone operations, and save yourself some time.  I’ve used (or at least trialed) all of these apps over the last 8 years since I started using drones for commercial purposes.

Drone Pilot Canada – CAD $39.99 (iOS and Android) – this app has been designed with the Canadian drone pilot in mind and has a lot of great features for pre-planning your flight, including easily querying the airspace that you are currently operating in, accessing crucial checklists, logging your flights, and other really useful features.

Windy.com – FREE (iOS and Android) – I was introduced to the website Windy.com during a spill response while onboard the CCGS John P. Tully years ago.  Since then it has been my go-to app for weather reporting ahead of every one of my drone flights.  It provides forecasting at the precise geographic locations that you select on the map, with the wind and precipitation forecast being comprehensive and easy to interpret.

RPAS Wilco – FREE (iOS and Android) – with the ability to automatically create site surveys in alignment with Transport Canada standards, this app can save you some time when preparing for flight.  It’s important to know how to do you own site surveys prior to relying on an app like this.  Once you are comfortable with manually completing a site survey, check out this app.

AirData – ranges from FREE to $14.99/mo (web platform + iOS and Android sync apps) – I’ve been using AirData for a couple of years now to track all flights from the DJI drones that are in our fleet.  AirData is great for easily viewing your flight paths, flight logs, battery metrics, flight statistics, and locations of photos and video from your flight missions, among other items.  I find it particularly useful when I’m out flying for a client to capture video and photos in many different locations.  I can easily look back to see what geographic location that I started and stopped video and see spatially where photos were captured.

One of the most important elements of a drone operation is the software that is used on the tablet, phone, laptop or other ground station device.  With DJI having over 75% of the global drone market share, many drone apps are designed to be compatible with their drones.

Map Pilot – $13.99 (iOS only) – this app allows you to create and fly an efficient flight path to map areas with your DJI drone.  There is a processing service that you can use as well, or you can use standalone software to process your images.  For $14, this app is great value for what it offers.  Offline map tile caching, multi-battery flights and terrain following are among the features available.

Drone Deploy – USD $99/mo to $300/mo (iOS and Android) – this solution has gained a lot of traction as an all-in-one solution, which also has added value apps that you can gain access to with a subscription.  This app comes at a cost, starting at USD $99/month for the basic subscription and jumping up from there for businesses.  Drone Deploy is focused on DJI compatibility for its platform, and its app market provides some really interesting niche tools that will save you time with your respective industry use cases.

Pix4D Capture – FREE (iOS and Android) – coming from one of the world leaders in RPAS photogrammetry software, this is an app used to plan flights for 3D mapping and modelling. I personally make more use of Map Pilot, but the times that I have tested Pix4D Capture, it was reliable for me.  Primary modes include: Grid Mapping, Double Grid Mapping, Polygon Mapping, Circular for 3D Models, and Free Flight.

DJI Ground Station Pro (iOS only) – designed by DJI with use of their own drones in mind, it is a reliable app for DJI drones when you would like to map an area, or input KML data and inspect specific locations.  It’s free to download but some of the extra features such as Point of Interest, KML/SHP import and PhotoMap are paid add-on features that range from $14 to $400.  I’ve used this app to have a live thermal feed next to a live true color feed when mounting dual cameras, and it was reliable for that as well.

UgCS – USD $39 to $2000 (iOS and Android) – this is a powerful flight planning app developed by SPH Engineering out of Latvia which supports multiple platforms well beyond just DJI drones.  In addition to the available apps, there is a desktop version of the software that is used in conjunction with the app to plan flights. Beyond autonomous capture modes, it can provide a live feed, flight simulator mode, and other advanced flight features.

Every drone operator wants to shoot great video, and execute in a professional manner with their drone. Producing high quality output for clients starts with smart video capture methods, which includes the use of apps that we will discuss here.

Litchi – $31.99 (iOS and Android) – this app allows for a lot of added value functions when capturing photos and video with your drone.  It has advanced waypoint flight planning and the ability to pre-program up to 15 different actions at each location that you are interested in.  The user interface has improved over time and it has some unique functions like a drawing tool to quickly determine the path for your drone to take, and other modes like POI, Selfie and others.

Video Geotagger – FREE version and Pro at $19.99/mo (PC) – I’m a big fan of this application, which simplifies the process of geotagging the video that you capture with DJI drones. Have you ever seen someone present video where there is video on half of the screen, and a map on the other half of the screen that follows along as the video plays?  This helps to accomplish that, where you can pinpoint where the drone was in geographic space when you are looking at particular video frame.  This is very useful when you’re using video to inspect a large area (e.g. Crop scouting, Search & Rescue, spill response, transmission line inspection) and you need to add some spatial awareness to follow up on the ground.

Video GeoEditor – $29.95/mo (PC) – another app by Remote Geosystems, which extends the functionality of the Video Geotagger described above, and allows you to: geo-edit your videos, overlay data and images on them, extract still images, and much more.  If you work with video a lot and want to add more spatial awareness to your data, this one is worth checking out further.

DJI Go 4 – FREE (iOS & Android) – for anyone flying a DJI Mavic, Phantom 4, Spark, Inspire 2 or Matrice series drone, it’s probably one of the first apps that you have used with your drone for capturing drone photos and video.  With a live feed, detailed camera controls, and many other features standard to a DJI drone flight app, DJI Go 4 is an app I use quite a bit out in the field.  For more advanced flight planning, mapping and video shots, I will normally switch to other apps available out there.

Agisoft Metashape – this is my personal choice for a standalone photogrammetry solution, and is one of the best solutions out there for stitching imagery captured by drones.  I’ve used Metashape and Pix4D extensively, and found that Metashape is more transparent and less of a black box when it comes to processing.  I’ve also found it to be generally faster than its competitors for processing data, which is important in incident management situations (e.g. wildfire or spill response).  Finally, it has a corresponding cloud/web map platform called Sputnik where you can serve up your drone data. It includes many of the same features as its competitors’ cloud services, but at a fraction of the cost.

Context Capture – Bentley is a well respected, major player in software that supports the areas of architecture, engineering, construction and operations.  They have been around since 1984, founded Microstation which has stood the test of time, and have resellers all over the globe.  Context Capture has powerful tools to interact with your data in 3D as well and has embraced data captured by drone.

Pix4D – I used Pix4D for a number of years and thought it was a powerful photogrammetry solution, but overpriced in relation to competitors that offer much of the same or more.  If you are willing to pay though, it is feature rich and is a leader in the drone data space for good reason.  The interface is clean and Pix4D Cloud has improved over the years as well and functions well in both 2D and 3D modes. 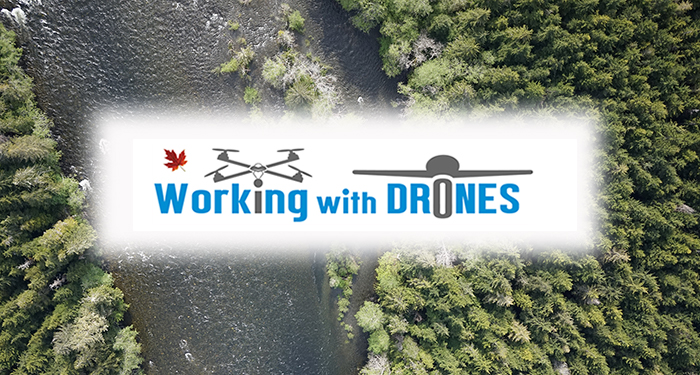 Fly Along with Us!

If you are a drone operator in Canada, subscribe to stay up to date with our latest content!

Please fill all the required * fields.

Supported by StrategicUAV.ca
Do you see the small pond near the top of the firs

A shot from the thermal infrared camera on one of

Sometimes we have to take a moment to just take in

One tool we use for our clients is the Strategic D

Emma in our #PortMcNeill office piloting our Mavic

Meandering through our site with a drone reconnais

Our RPAS Program Lead Mike Morellato had the pleas

I think there's a better route through the bush he